Originally an Edmontonian girl, recently settled on the west coast of Canada, Brenda celebrates 30+ years as a touring recording artist and multi-instrumentalist (guitar, flute, ukulele, harmonicas, &amp; pennywhistles. Performances on television, radio and film led to the jazz release album, “Meant to Be”. Her collaborations with artists such as Chet McCracken the Grammy-nominated, platinum-2 time gold drummer brought the release of co-written material on two albums “After the Rain and the appropriately named, “Through Brenda’s Eyes”. A tour with Nancy Sinatra resulted in a performance at Dodger Stadium’s, Wango Tango Festival, of 50,000 attendees, and international performances, across the USA and Asia. A seasoned versatile artist, Brenda love of music continues to evolve and thrive wherever she is. 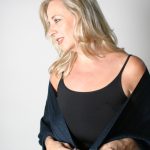 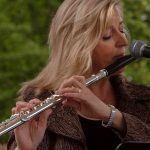 Jazz Out Of The Mainstream
By Ed Gambill, producer

"You gotta hear this;" That's what you tell a friend when you've heard a great performance on a CD. It's so hard to write a review of this CD, there are so many good things to say about it. I've listened to it over and over and haven't heard a cut that was less than great. The Ray Charles album "Genius Loves Company" was my favorite but now Brenda Morie's "Meant to Be" has bumped Ray and the gang to the curb.

I came to know Brenda's music through some mutual friends. I was in pre-production planning for a new jazz radio program that I developed to showcase jazz musicians without recording label contracts. I asked some of my buddies for suggestion for a female vocalist who would help us record a pilot program. More than one suggested Brenda Morie.

Take a top notch performer like Brenda, combine it with an awesome group of support musicians and bring in a producer like John Sisti and you get a CD that rates a "You gotta hear this".

Robinson, who plays trumpet for his band, teamed with Winston-Salem - by way of Canada - flutist Brenda Morie to create a jazz masterpiece with their rendition of Van Morrison "Moondance." Morie, blessed with a smokey, melodic voice supplied vocals for several songs. But it was her dreamy and timely - and, dare one say, sexy - work with the flute that carried the set.

Profile on Brenda Morie Funk, Jazz, Latin, R&B Based out of: Winston-Salem, NC Funk, jazz, flutist and vocalist, Brenda Morie performs classic jazz with popular influences. Morie released her first solo CD this year called " Meant To Be" featuring the Triad's best musicians and special guest artists such as Grammy -Nominated drummer Chet McCracken, "Doobie Brothers" and guitarist , Chris Pinnick " Chicago". Whether you are a jazz fan or not don't miss this one!! Not a fan of the Flute? Morie will make you one!

Excellent CD
Reviewer: Steve McC.
Meant To Be is an exceptionally fine CD, from the selections, to the musicianship, to the overall production, which are all excellent. Morie's virtuosity on the flute is surpassed only by her sensual, sometimes smokey, vocals. Check out the lady's cover of Van Morrison's Moon Dance, along with Chitlins Con Carne, and Everytime He Whispers. You'll want to hear more from Brenda Morie.

What a refreshing and talented artist!
Reviewer: Walter Black
I had never heard of Brenda until one day recently when I was browsing around CD Baby in search of new discoveries. After listening to a couple of her sample cuts, I decided her style and sound were sufficiently appealing that I needn't trouble to check the other samples. I immediately placed an order for the CD and, upon receiving and listening to it, confirmed my judgment that anything by this lady should be an "automatic buy" in the future! I don't know whether Brenda considers her primary forte to be her singing or her flute playing, but I give her an "A" on both scores. Anybody who relishes a smooth, cool, upbeat jazz sound and a highly appealing voice with polished phrasing can't go wrong with Brenda. Let's hope this is but the first of a very long line of her CDs.

The Best Jazz CD I've Picked Up in a Long Time
Reviewer: Ronald Shelton
I think this is one of the best jazz cd's I have ever purchased from the groove of Chitlins Con Carne, to the words of I could write a book, each song is completely different and so relaxing to hear. When Brenda gets to playing that flute using it like Jimmy Hendrex as a lead instrament you almost forget that lady can sing her a** off!

Fantastic
Reviewer: Kim Chambers
Brenda Morie has such a beautiful style with her vocals and flute both. Her voice and phrasing alone make you to smile and her touch on the flute sends you straight to heaven! Whether you are a jazz fan or not don't miss this one!!

Not a Fan of the Flute? Morie Will Make You One!
Reviewer: Peter Romanov
Puzzle of Hearts alone makes this cd a winner. Morie's voice is mesmerizing and this song showcases just how much range she truly possesses. She expresses vocal emotion extremely well. The playful Walk Between the Raindrops will have you humming and dancing along thanks in part to Rhode's wonderful ivory tickling. I've never been a fan of the flute, but this cd convinced me that the flute can be a wonderful thing to hear in the right hands. After one full listen of this cd, Brenda will leave you wanting "Morie".

Reviewer: Synthia Folwell
For years, Brenda Morie has been acclaimed as a fine professional musician, an exquisite flutist, talented guitarist and a singer with stellar tone and variety. But perhaps not as well known are her equally gifted abilities as a teacher. Brenda is my coach in voice and guitar. Her style is less pressures than inspiration, less drill than improvisation, fewer lectures than motivation. With her enthusiastic approach, I've learned to sing with more clarity, even tone and volume. She has a way of bringing out the natural qualities in each student's voice. She meets us where we are musically and leads us toward our potential ability. Brenda Morie is a master teacher and mentor. Those lucky enough to find themselves in her presence will be inspired.

Scroll back to top